A Daf CF 350 truck with registration number GT 9730-13, driving from Accra to Kumasi with two occupants, loaded with 850 bags of cement on Thursday morning crashed with several cars including a school bus when its brake failed at Nsawam in the Eastern Region.

The incident occurred when the driver, Abugrago Apuying, 31 in charge of the cement truck on reaching a section of the road at Nsawam, while he was descending a slope, reportedly had his brake failed, crashing into several vehicles. 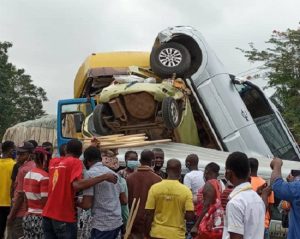 The Deputy Eastern Regional Police spokesman, Sgt, Francis Gomado who confirmed the incident, said the cargo truck lost control of its steering wheel and veered into the lane of the other vehicles leaving them no option other than to collide.

According to him, 15 pupils and one staff on board, their driver Samuel Darko aged 35, and their bus belonging to Sure Start International School, Nsawam were also involved.

All the vehicles were damaged whilst the pupils escaped unhurt but are currently being examined by medical personnel at Nsawam Government hospital.

Some of the passengers on board the other vehicles sustained injuries and were treated and discharged at the same hospital.

He said the Police have since commenced an investigation into the matter.

I Know Them Personally, 3 Are On TV And 6 Are On Radio- Captain Smart Reveals

Man Sells His Kidney To Send Daughter To School But She Commits $u!cide Because of

Mr. Anti-Ohene urged the Police hospital to put the equipment into good use to save lives as the company prepares to give more to assist in providing quality healthcare. ‘’I will be fulfilled to see that the items have saved at least one life’’, he added.

COP Mr. George Alex Mensah, Director-General Services who received the donation on behalf of the Police Administration expressed gratitude to QNET Limited and appealed to other philanthropists to emulate the example. He was joined by the Acting Medical Director, DCOP Dr. Ewusi-Emmim, the Hospital Administrator DCOP Mr. David Eklu, the Director Finance, ACP Mr. Osei Akoto Arthur and other police officers.

The Police have arrested Vincent Tawiah, a 22year-old internet fraudster at Accra Mall for defrauding unsuspecting persons under the pretext of selling iPhones to them. He was arrested by officers of the National Police Operations Department on Monday 10th May, 2021.

Suspect’s modus is to advertise the iPhones on Instagram and other social media platforms for prices ranging from One Thousand One Hundred Ghana Cedis (GH1,100.00) to Five Thousand Ghana Cedis (GH5,000.00), less than the market prices of iPhones. When contacted by interested persons, he would ask them to send mobile money to the mobile phone account number 0551978205 registered in the name of Rhydale Addae.

Police used one of his victims as a bait to arrest him. Other victims have since come forward to identify Vincent Tawiah as having defrauded them. The Police are therefore asking persons who have also been defrauded by the suspect whose picture is attached to this story, to report to the National Operations Department at the Police Headquarters, Ring Road Accra or call 0238894764.

Ministry of Finance signs two compact agreements for post Covid-19 transformation with Ministry of Tourism and Ministry of Trade & Industry.

The Ministry of Tourism will also benefit from an amount of One hundred Million Ghana Cedis ( GHC 100,000,000.00) which will be used for addressing: Ghana’s tourism infrastructure, transformation of our beaches, sector operators skills revitalization programmes, comprehensive marketing and brand promotion activities of our arts and culture among several others.

This funding supports are different from the Ministries 2021 budget rather, it forms part of measures under the Ghana CARES Obatampa program by President Akufo-Addo to get the economy back on track.

The Compact is a partnership agreement between the Ministry of Finance, as the Coordinating authority, and sector Ministries, under the supervision of the Inter-Ministerial Coordinating Committee (IMCC) to ensure effective and timely delivery of the targets set for the various Ministries under the CARES programme for the 2021 fiscal year.